Nyesom Wike, the Rivers governor, and Governor Ahmadu Fintiri of Adamawa on Friday, November 19, spoke on the mode of selecting the Peoples Democratic Party (PDP)’s presidential candidate ahead of the 2023 general elections.

Both governors spoke on Friday during Wike’s courtesy visit in Yola Government House, The Nation reports.

While Fintiri noted that he does not support the idea of zoning, his Rivers counterpart said stakeholders in the party would make a choice on the preferred candidate when the time is due. 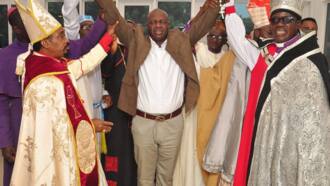 Based on the recent successful convention, Wkie expressed certainty that the PDP will take over power in the next presidential power.

Wike had been projected by a group, Grassroots Development Initiative (GDI) as one of the most competent leaders to succeed President Muhammadu Buhari in 2023.

According to the group, the Rivers governor had what it took to reposition Nigeria’s economy and set it on its path to total recovery.

GDI’s southeast zonal coordinator, Sam Anya, noted that Wike’s massive projects in the oil-rich state gave him away as the best man for the job.

In a statement, Anya, therefore, called the PDP to choose the governor as its consensus presidential candidate ahead of the next presidential election.

Anya stated that Wike has a deep interest in uniting the nation, investing in education, and ending the security challenges across regions.

“Wike is a Nationalist who truly believes in the peace, unity, and progress of Nigeria and has clearly demonstrated this in his uncompromising stance against separatist agitations and His liberal posture as demonstrated during the Sokoto fire inferno.

“We are totally convinced that what Nigeria needs right now is a courageous and vibrant leader who is capable of managing a complex nation like Nigeria. That resourceful manager is governor Wike; he has proven his capacity and dexterity on numerous occasions.”