Anambra – The national coordinator of the All Progressives Grand Alliance (APGA) Media Warriors Forum, Chinedu Obigwe, has said nothing will stop the swearing of Professor Charles Soludo as Anambra governor on Thursday, March 17, 2022.

Daily Sun reported that Obigwe said all naysayers and prophets of doom predicting that the governor-elect would not be sworn in would be put to shame.

Legit.ng gathers that the APGA chieftain was reacting to a report credited to one Prophet Atasie who reportedly said Soludo would not be sworn and advised the party’s followers not to celebrate yet. 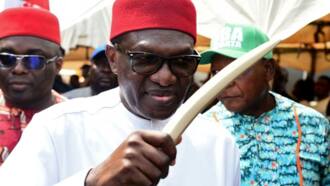 Andy Uba sends strong warning to APGA camp, tells them what to do

Obigwe accused those he described as blind followers of Andy Uba, candidate of the All Progressives Congress (APC) in the election, of circulating the report.

APGA followers will continue to celebrate

According to him, many APGA faithful and other prominent Ndi Anambra will carry over the celebration of Soludo’s victory in 2022.

He said the reason for celebration was because God granted the people their hearts’ desire on November 6, noting that Soludo was holding a divine mandate while any hand that attempts to collect it from him would face divine wrath.

“Many prophets of doom prophesied that Soludo will not win the election but he still won with a wide margin. That is to say the hand of God is in his well-deserved victory. 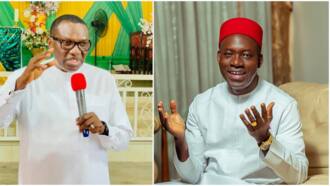 The so-called Atasie will be put to shame on March 17 next year being the day Soludo will be sworn in. The November 6 governorship election ended in praise and the forthcoming handover ceremony will also end in praise.”

He said the Anambra people and APGA team of lawyers were ready to meet Uba in court to defend the mandate they gave to Soludo and defeat him again.

Meanwhile, Soludo has been sued for allegedly providing false information in the affidavit (Form EC9) he submitted to the Independent National Electoral Commission (INEC).

Soludo, the deputy governor-elect, Onyeka Ibezim, APGA and INEC are defendants in the suit filed by Adindu Valentine and Egwudike Chukwuebuka at the Federal High Court in Abuja.

The Federal High Court in Abuja will on Tuesday, November 30, deliver judgement in the suit which is seeking Soludo’s disqualification.