Lagos – Governor Babajide Sanwo-Olu has emerged as the candidate of the ruling All Progressives Congress (APC) in Lagos.

Sanwo-Olu was the sole aspirant in the primary election which was held at the Mobolaji Johnson stadium.

Sanwo-Olu secured 1,170 votes out of a total of 1,198 accredited voters from across the state.

The governor will now slug it out with Abdul-Azeez Olajide Adediran, popularly called ‘Jandor’, who won the Peoples Democratic Party (PDP) governorship primary election to emerge as the party’s candidate for the 2023 elections in Lagos state.

Jandor defeated Dakova Kolawole after having 679 votes out of 709 available votes.

“I am grateful to God, the distinguished delegates and the leadership of the APC for the chance to continue the good work of governance that we have begun in our great state.

“With this resounding victory in the primary election, I am confident that we are united and ready to continue to be a beacon of hope and service to this great state.

“To the other contestants, I congratulate you for being a part of this very democratic process and invite you to join hands with me.”

Meanwhile, the Gina Unimke and Trisha Shine foundation has launched a massive plan ahead of the 2023 general elections. 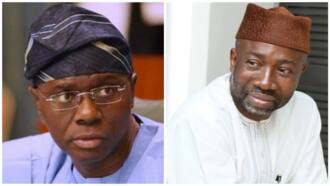 In its unveiling statement issued on Thursday, May 5 in Abuja, the foundation stressed the importance of participatory democracy and a credible poll come 2023.

2023: FCI to partner with other agencies to combat fake news

On its part, FactCheck Initiative (FCI) has created a team for a cause that will involve partnering with the government and other agencies in other to have free, fair, and peaceful elections in Nigeria void of any form of violence in 2023.

The main aim of this cause will be to spot, examine and respond to the impact caused by any misleading information ahead of the upcoming 2023 general elections in Nigeria.