The governor of Anambra state, Charles Soludo, has said the majority of the unknown gunmen causing mayhem in the southeast region of Nigeria are Igbo people.

Daily Trust reports that the governor while declaring a curfew in seven local government areas of the state on Thursday, May 26, the unknown gunmen’s real objective is lucrative criminality and foisting their idolatrous religion on the region.

He added that Anambra state has since remained a target because it is the most lucrative location for kidnapping for ransom in the southeast.

Soludo noted while the Igbo people are known for their enterprise, the criminals are bent on killing Ndigbo businesses by enforcing the sit-at-home order of the outlawed Indigenous People of Biafra (IPOB).

“Let us be very clear. These criminals causing mayhem in Anambra, albeit of disparate groups and gangs, are Igbos (dominantly from other southeast states) whose real objective is lucrative criminality and foisting their idolatrous religion on the region

“Unfortunately, every criminal gang (including cult groups) claims to be a “liberation movement”, making it difficult to differentiate between any genuine agitators from criminals. Unfortunately also, the criminals now dominate the space.” 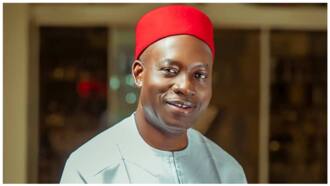 Governor Soludo, on Wednesday, had addressed the people of Anambra state and declared a curfew in seven local government areas of the state.

According to Soludo, curfew will commence on Friday, May 26, 2022, in areas such as Aguata, Ihiala, Ekwusigo, Nnewi North, Nnewi South, Orumba North and Orumba south LG areas.

The Anambra state governor further appealed to residents in the affected areas to corporate with the directives.

Report exposes the man behind unknown gunmen in southeast

In a related development, a media report revealed that the unknown gunmen terrorising the southeast region are known as the Fallen Angels or Auto-Pilot group.

According to the report, the group is made up of dissidents in the Indigenous People of Biafra (IPOB).

“In closed circles, they call them ‘the Fallen Angels’ and in more common parlance, they are known as ‘the Auto-Pilot group’.