One of Nigeria’s top billionaire businessmen, Femi Otedola, appears to have taken a leaf from younger celebrities and recently put his wealth on display.

The billionaire who has been known to lead an unassuming lifestyle recently put that aside to showcase a private jet in the most interesting way.

In a video making the rounds online, Otedola was seen relaxing in the tastefully furnished living room of the jet. The living room was complete with red leather chairs, a big wooden centre table, a big picture frame, an expensive-looking rug, a flat-screen TV and more. 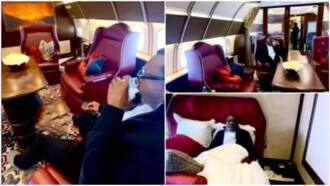 However, that was not all. The billionaire later showcased the bedroom in the private jet. He had a big sized mattress arranged with several blankets and pillows as he got set to take a nap.

That still wasn’t the end of the video. Otedola’s luxury bathroom was also displayed and the jet no doubt looked like a comfortable home.

See the clip below:

See another video of the billionaire chilling in the jet below:

The video soon trended online and fans had a lot to say about it. While some people gushed over the interior of his jet, others noted that he was showing off and some even said he learned from controversial Nigerian socialite, Hushpuppi.

Read some of their comments below:

“So e dey hungry them to show off too, hush puppy really inspire a lot of people o.” 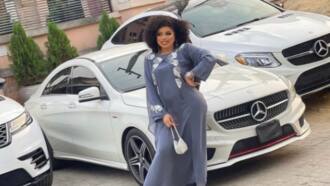 Let me enjoy my vanity before I die: Bobrisky replies ‘oppressed’ fan as he flaunts luxury cars in his garage

“ Them need teach baba how to flex and show off.”

“This video dey sweet me abeg .”

“But wait , when did @femiotedola starts showing off ?? I’m sure my Mentor but have a reason ..! More blessing Baba mi , you worked for it sha “

“Otedola is no one’s mate na.”

Femi Otedola and one of his daughters, Temi, gave internet users something to talk about after a video of them made the rounds online.

Just recently, the father and daughter duo jumped on the trending alcohol challenge on TikTok.

The challenge involved them dancing to popular singer, Joe Boy’s hit song. Interestingly, Femi and Temi added their own twist to the trend.