Jurgen Klopp and Mikel Arteta had to be held apart by members of their backroom staff following a fiery exchange on the touchline.

The incident happened during Arsenal’s visit to Anfield in the Premier League on Saturday, November 20.

However, Klopp did not take Arteta’s reaction kindly as he marched from his technical area while shouting furiously at his opposite other. Interestingly, Arteta also steamed towards the Liverpool boss gesturing madly at him.

With the incident threatening to escalate, both managers were pulled apart by the rest of the technical staff, with a match official also intervening.

Michael Oliver, who was officiating the match later diffused the incident by booking both managers.

Speaking on the bust-up, Klopp admitted it was not planned as he defended Mane who he described as “a physical player.”

On his part, Arteta revealed he spoke with Klopp after the match and buried the hatchet.

The Arsenal boss went on to congratulate the title-chasing Reds on their victory at home.

“Yes I did [speak to Jurgen Klopp after the match] and I congratulated him. These moments are left on the pitch,” he added. 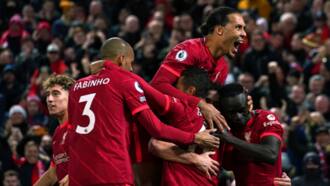 Ironically, Mane went on to score the home side’s opener before Diogo Jota, Mohamed Salah and Takumi Minamino scored a goal each to finish off the Gunners.

The result momentarily fired Liverpool to second on the log with 25 points, four behind leaders Chelsea who thrashed Leicester 3-0 in their own fixture.

Arsenal, meanwhile, remain fifth on the log with 20 points, one above Wolves who secured a crucial win over high-flying West Ham.

Earlier, Legit.ng reported a Group B Champions League clash pitting Atletico Madrid and Liverpool was marked with dramatic scenes at fulltime after Diego Simeone snubbed a handshake with Jurgen Klopp.

Simeone extraordinarily turned down Klopp’s handshake, storming down the tunnel before later defending his actions as he claimed it is unhealthy to shake hands after a match.

Mohamed Salah was the man of the moment during the clash as he scored Liverpool’s match-winner.