Instead of allowing it to waste away, a man has put to work his creative mind in transforming an old Volkswagen Beetle into an abode.

The creative man converted the abandoned car into a single room house.

In a short video shared by @naijaloadedotng capturing its interior, the Beetle turned house has a normal roof over its head, with the car door serving as its doorway.

The small apartment’s interior left many awestruck. The car windows were covered with curtains and the driver’s seat area was replaced with what appears to be a shelf. 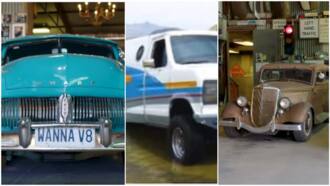 4 talented people who have built amazing cars, one of the vehicles can ‘turn’ into boat inside river

The passengers’ seat area has in its place a bed and a lengthy seat that has the same material as the bed.

The bed is constructed in an elevated manner leaving room for space underneath it.

Meanwhile, Legit.ng previously reported that a man had turned a double-deck bus into a fine 3-bedroom house.

A video of its interior shared by 22 Words showed that the passengers’ seats were replaced with lengthy cushion chairs and a dining table.

Of the three bedrooms located at the top deck, one has a king-sized bed. Interestingly, the toilet was created at the driver’s seat. On the outside, there are sun lounges and then the bathroom. 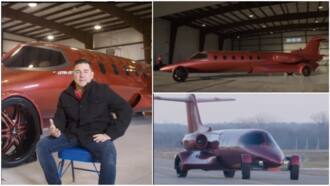 Man buys aeroplane and turns it to his house

In other news, a man had bought an old Boeing aeroplane and converted it to his house.

Bruce, in order to put the aircraft in a shape that suits his taste, spent another $120, 000 (N49 million) to disassemble it after which the aeroplane was moved to his property in Portland.

He also added other household necessities to the now turned house, as seen in a video shared by UNILAD Tech. He now stays in the aeroplane for 6 months a year. The aeroplane’s cockpit is where he does his reading.