Man United board has reportedly reached a decision to sack Ole Gunnar Solskjaer following an emergency meeting in the wake of their 4-1 defeat against Watford on Saturday, November 20.

The Red Devils staged a disappointing performance at Vicarage Road on their return to action after the international break, with the Hornets dominating proceedings from the blow of the whistle.

The hosts downed United 2-0 at the break before Donny van de Beek who came on as a substitute pulling one back for Ole’s men. 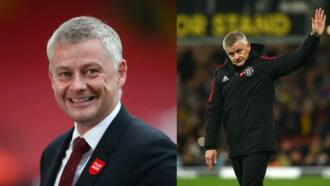 However, things went from bad to worse for United after skipper Harry Maguire was shown a red card to end hopes of the Manchester side springing a comeback.

Ole on the brink

The result left the Old Trafford dwellers with five defeats in seven Premier League matches, forcing the club’s hierarchy to hold crisis talks to determine the future of Solskjaer.

The Times reports United have now made a decision to sack the Norwegian tactician, with the publication claiming the club’s owners believe the coaching team does not have what it takes to steady the ship.

It is believed United will now have to part with £7.5 million (N4.5bn) as compensation for Solskjaer after the ex-Molde boss penned a new deal back in July that should run until 2024. Former Real Madrid boss Zinedine Zidane has already been touted as a potential replacement, with Manchester Evening News reporting Darren Fletcher is already in line to take over on an interim basis.

Fletcher rejoined United back in March as the club’s technical director and could be in charge when the side travels to Spain to take on Villarreal in the Champions League on Tuesday evening, November 23.

Solskjaer apologises for smiling during post-match interview after Watford humbling

Earlier, Legit.ng reported that Ole Gunnar Solskjaer has apologized after he was spotted smiling mid-interview shortly after Man United’s 4-1 thumping by Watford.

Man United were hoping to bring to a halt their disappointing run of results during their trip to Watford but instead suffered yet another frustrating defeat.

The result meant the Red Devils have now picked up just four points from the available 21, leaving them 12 points adrift of league leaders Chelsea who they will face in their next Premier League fixture.