A young Nigerian disk jockey, DJ Michelle, appears to have been given a second chance at life after she was rescued hours after being swept away at a beach in Lagos.

The man who was reportedly responsible for bringing her out of the ocean alive has finally shared more details on what happened.

In series of videos making the rounds online, the unnamed man recounted how he has passed the spot where Michelle was when his mind told him to return to where she was.

Where’s my sister’s body? Lady demands as she mourns 21-year-old DJ who drowned at Lagos beach

According to him, he initially thought she was one of the girls who had been known to get drunk on the beach.

It was later reported that the man performed CPR on Michelle after he went back for her.

A crowd of grateful people gathered round the man including DJ Michelle, her mother, sister and uncle as they thanked him for his bravery.

See the video below:

News of the 21-year-old DJ’s death had initially made the rounds on social media after her sister, Stella Besin, cried out that she had drowned at the beach.

According to Stella, people had watched her sister drown without helping her.

The young DJ was said to have visited a beach in Lagos in the company of her friends on Thursday, November 18. It was reported that Michelle was swept away by the ocean after trying to film a video with her mobile device. 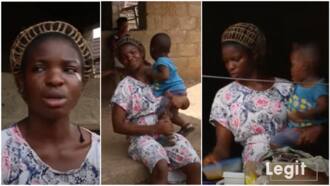 Woman begs Nigerians for help, says she and family are facing eviction from uncompleted building

A fresh video making the rounds on social media captured the young lady reunited with her sister who had raised an alarm about her sudden disappearance.

According to her sister, Michelle spent a total of 24 hours submerged in the ocean. Others in the background were also heard saying the young lady survived the ordeal simply because she is a water spirit.