A former governor of Abia, Orji Uzor Kalu, has boasted that he can perform much better than Gernot Rohr, the Super Eagles coach.

The Senate chief whip said this in reaction to the team’s 1-1 draw with the Blue Sharks of Cape Verde to qualify for the 2022 Qatar World Cup, PM News reports.

The senator on Friday, November 19, stated that Rohr was as good as the last match which ended in a somewhat disappointing draw.

Kanu said that he is a better motivator than the German-born coach, adding that he lacks, style of play and stamina, Daily Trust added.

“Gernot Rohr is not a motivator to the players because he has nothing to offer; I can even motivate the players more than him because I’m a super motivator of my players.

“He is not a coach; I don’t see anything good in him; he has no stamina, no strategy, he doesn’t play any system and his team doesn’t excite me.

“He is not a coach; I don’t see anything good in him; he has no stamina, no strategy, he doesn’t play any system and his team doesn’t excite me.”

Meanwhile, Kalu had expressed deep love for his wife, Ifunanya, during her birthday celebration on Tuesday, October 26. 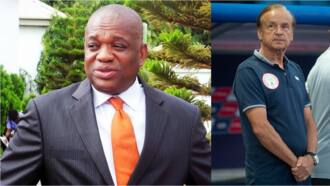 The All Progressives Congress (APC) described the celebrant as his friend, love, companion, adviser, wife, and more.

Referring to her, Kalu said a good wife is royal at heart, a crown to her husband, and pride to the family she comes from, adding that all of these are bodied in the word acronym W.I.F.E, which in his view stands for Woman In Full Effect.