The apex Igbo socio-cultural organisation, Ohanaeze Ndigbo, has said that the process for the release of Nnamdi Kanu, the detained leader of IPOB, has begun.

Ohanaeze said this in reaction to President Muhammadu Buhari’s reply to Igbo leaders who met him in Abuja on Friday, November 19, over Kanu’s release, Punch reports.

The group which blamed southeast politicians for the problems encountered by the region said the president’s response has kindled hopes that the IPOB leader will regain his freedom.

It, however, advised the federal government to keep to its own side of the bargain in respect to Kanu’s trial, warning that attempts to kill him will disintegrate the country, knowing the consequence of eliminating a British citizen.

Dismission rumours of assassination attempts on Kanu’s life, the organisation said they are nothing but false reports.

“Do not interfere”, “Best way to go”: Nigerians disagree as Buhari speaks on Nnamdi Kanu’s release

“The process for the release of Nnamdi Kanu has begun with the closed-door meeting of Buhari and the Igbo leaders held in Abuja. We hope that FG will be sincere enough to keep their side of the bargain and shouldn’t be listening to the deceitful tales of the South-East politicians.

“Attempts to assassinate Nnamdi Kanu will end Nigeria’s existence and the Federal Government knows the consequences of hurting a British citizen in their custody. So, stories of assassination attempts are a ruse and will likely lead to creating disaffection to the already sealed deal between FG and these neutral Igbo leaders, who visited President Buhari today, to subtly put procedures for the release of Nnamdi Kanu.” 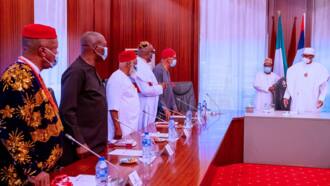 Earlier, President Buhari had promised to consider the request for an unconditional release of Nnamdi Kanu, leader of the outlawed IPOB.

The president made the promise on Friday, November 19 while receiving a group under the aegis of Highly Respected Igbo Greats, led by First Republic parliamentarian and Minister of Aviation, Chief Mbazulike Amaechi, at State House.

“You’ve made an extremely difficult demand on me as leader of this country. The implication of your request is very serious. In the last six years, since I became President, nobody would say I have confronted or interfered in the work of the Judiciary.”