Top Nigerian singer, Davido, has started an impressive trend on social media after friends gathered to donate millions to him to show their love ahead of his 29th birthday.

Popular socialite and billionaire businessman, Obi Cubana, is one of the numerous people who has been influenced by the trend and is already considering doing the same.

Taking to his social media page, Obi Cubana noted that he would also be going the Davido route by posting his account number online.

“I need to paste my account details, make I try something.”

Obi Cubana’s wife, Lush_Eby, also encouraged him to do it. She noted that she would help him count the money he gets from his well-wishers.

“Pls paste! Will help you count.”

A number of celebrities were amused by Obi Cubana’s post and some of them even noted that he would get billions within minutes.

Read some comments below:

“Another Oba Money invasion Money mayhem is about to happen o .” 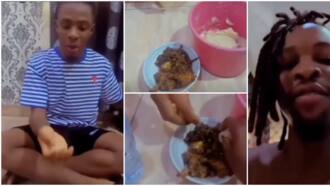 “Baba u no Wetin fit happen if u try am … use my account instead .”

It all started when the DMW boss and much-loved music star shared a video where he noted that he was always helping people and it was time for them to also show him love.

Davido called out to his friends and crew members to prove their love for him by sending him at least N1 million.

Some of those who showed massive love to Davido include Nigerian billionaire businessman, Femi Otedola, Nigerian monarch, Oba Elegushi, and other prominent personalities.