It is a time of celebration in one of Nigeria’s top royal families after the Ooni of Ife and his Olori’s son clocked one.

The royal couple welcomed their son in November 2020 but kept his name and other details about him under wraps.

However, to mark his first birthday, the Ooni of Ife took to social media to reveal their son’s name to be Prince Tadenikawo.

Not stopping there, Oba Adeyeye shared adorable photos of his one-year-old and accompanied the snaps with a touching note where he explained that he is an answer to their prayers and he came at the appointed time.

“Prince Tadenikawo is One today!!!

“An answer to many prayers, you came right at the appointed time. To the glory of the Almighty, the King of Kings, you will surely live to fulfil your destiny in this world!

“Lots of Love from – Ooni Ojaja II and Olori Silekunola.”

Olori Naomi on the other hand also penned down a lengthy note where she described her prince as a gift from God.

According to her, she has got joy, love and peace like a river in her soul. 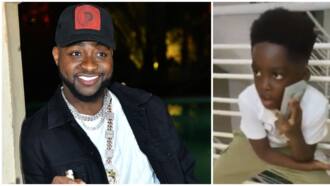 See the snaps below:

Legit.ng has gathered some of the comments from fans as they celebrated the prince of Ife on his first birthday.

“Looks so much like his mom. Happy Birthday Prince.”

“Wow so cute! May God continue to bless and keep you.”

Just days after his star-studded birthday celebration, the monarch took to his official page to speak on his daughter.

In a lengthy note, Oba Ogunwusi recounted how he had Princess Adeola when he was just 19 years old. According to him, parenting comes with unique challenges and it was a huge responsibility for him.