It is indeed a beautiful moment in the household of the popular Okoye family and many Nigerians on social media are thankful to witness events unfold.

Anita started off by wishing the father of her child and his brother a happy birthday while celebrating their recent reunion.

She extended her gratitude and appreciation to the brothers for letting her have a good relationship with each of them in spite of their differences. 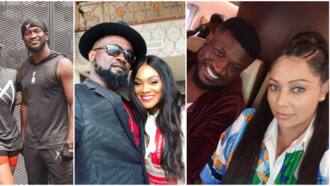 Dem be 1 no be 2: Wives of the Okoye brothers excited as their husbands reunite, celebrate them online

“Thank you for letting me have such a great relationship with both of you independent of your rift…I am delighted I didn’t let your coconut heads let me choose sides.”

Anita also used the opportunity to point out that there is a lesson for everyone to learn from the PSquare brothers.

She noted that people shouldn’t meddle in affairs that do not concern them and they shouldn’t be swayed by opinions on social media.

Anita’s friends and followers also joined her in celebrating the brothers. Read comments sighted below:

“We Thank God for this great birthday gift God bless them both.”

de_majestic1 made me cry you are such a loving caring sweet woman.”

“Beautiful caption that explained it all , happy birthday legends.” “Happy birthday to you #paulokoye #peterokoye . May God continue to keep and protect you. May his love never depart from your abode. Many happy returns Twins!”

“Happy and blessed birthday to them both.”

Meanwhile, Legit.ng previously reported that Peter and Paul Okoye were among celebrities who got called out by Davido for his birthday donation.

The singer congratulated them for reuniting while adding that they should quickly send their N1 million donation just like other celebrities.

Davido’s post stirred hilarious reactions from social media users who have followed his activities closely in the past few hours.