Adele has finally hit the world with her highly anticipated album 30 and people are feeling ALL the feels!

It’s been a long time coming with many fans hoping it will be worth the wait. The album just dropped and the Hello hitmaker fans were ready and waiting with their tissues.

30 is the first album she has released since the downfall of her marriage and this was clearly her way of letting go, reported Billboard. Adele speaks of her sadness, strength and journey in the album, something fans were preparing for like a long-awaited love story. 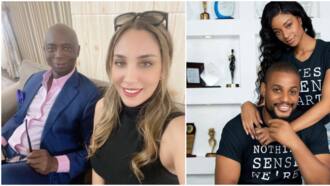 The 12-track album set social media on fire, reported Page Six. People from all over the world took to the Twitter streets to express their feels and drop their favourite tracks. Hearing how Adele planned the tracks out to tell her story through music blew many away. However, there were still some who had hoped for a different sound from the songstress.

Take a look at some of the comments.

“I don’t think #Adele30 sounds the same as her previous albums at all.”

“Something about #Adele30 feels very cinematic for me. I have a movie playing in my head whenever I listen to this album, and I love that as a filmmaker.”

Adele opens up about feeling devastated and humiliated after her divorce 2021 in review: Erica, Pere, Laycon, other BBNaija housemates who got extravagant gifts from fans

Adele has provided the world with the best teary ballads since she was 19 years old but has seldom spoken up about experiences that led up to the hit songs.

Now, after her most vulnerable album, the Set Fire to The Rain hitmaker has shared the emotions she went through when her marriage to Simon Konecki ended, reported Legit.ng.

Adele recently released her much-anticipated album titled 30, where she airs out all there is to know about her split from ex-husband Simon. Fox News reports that the two finalised their divorce in March this year.