The 36-year-old could not help his team win their last group game against Serbia as they last by 2-1 and missed automation qualification to Qatar 2022.

The Selecao will now wait until March 2022, to pass through the playoffs and to determine their destiny for the Mundial.

However, the five-time Ballon d’Or winner is now focusing on the task ahead of the weekend for United’s trip to Vicarage Road.

The Red Devils were outclassed by their city rivals Man City by 2-0 at Old Trafford which dropped Ole Gunnar Solskjaer’s side to sixth on the Premier League.

And Ronaldo and his teammates need to get fired for up for the encounter with the Hornets to get back to winnings ways.

“Time to role up the sleeves once again and just get the job done! Let’s chase what we are trying to achieve this season.”

Meanwhile, Legit.ng had earlier reported that fans have accused Aleksandar Mitrovic of taking a slight dig at Cristiano Ronaldo after celebrating with a bottle of Coke in his pants, The Sun. 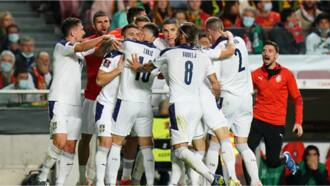 The Serbian striker scored the all-important winner to book an automatic spot for his country during the 2-1 win over Portugal.

After the final whistle, the Fulham striker came out of the dressing room in his pants holding a bottle of Coke while celebrating with Serbian fans remaining at the Estadio da Luz.

Meanwhile, Legit.ng had earlier reported that fans are not holding back their anger after Cristiano Ronaldo was selfish in the final minutes of Portugal’s 2-1 loss to Serbia in their final World Cup qualifier, Sport Bible, Twitter.

The Selecao got themselves trailing after going ahead in the first half through Renato Sanches but Dusan Tadic equalized later on.

Before Aleksandr Mitrovic headed home in the winner in the 90th minute to give the Eastern European the automatic ticket to next year’s World Cup.