Nigerian singer Davido is having nothing less of a good time and it appears even the little ones can’t help but show love to him.

Just recently, Tiwa Savage’s son, Jamil, warmed hearts on social media after he shared a video on his Instastory channel.

The little man appeared to be on a phone call as he wished Davido a happy birthday in advance. 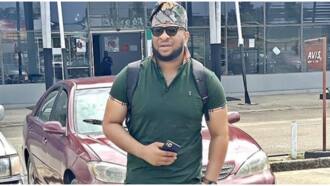 This was followed by Jamjam requesting for Davido’s dollar account.

Jamil also appeared to mean business as he was spotted flaunting huge stacks of hard currency in the video.

As expected, the clip stirred different reactions from online observers and they had a word or two for Jamil.

Read some of the comments sighted below:

“This one is using style to pay for Imade’s bride price.”

“Omo e come be like say I no serious with my life again.” Our money: Nigerians react as Davido set to splash N58m on Patek wristwatch after raising N171m from donations

Davido calls out PSquare brothers, tells them to send him N1m each

Meanwhile, Legit.ng previously reported that twin brothers Peter and Paul Okoye were among celebrities who were called out by Davido for his birthday donation.

The singer congratulated them for reuniting while adding that they should quickly send their N1 million donation just like other celebrities.

Davido’s post stirred hilarious reactions from social media users who have followed his activities closely in the last few hours.