According to the university, Dr Gumede started studying a BSc in 1994 but academic exclusion and her pregnancy with Ms Msweli, unfortunately, resulted in her dropping out. Four years later she re-enrolled to study Community and Development Studies part-time.

Nigerians celebrate smart girl who scored A’s in all her WAEC papers, got 345 in FUTO Post UTME

Ms Msweli on the other hand considered studying in Cape Town but was accepted by UKZN to study Life and Environmental Sciences. She found university life to be quite challenging, despite having done so well in high school.

UKZN reported that Ms Msweli believes her family is a gift from God and that they know her better than anyone else does. She added that her mother taught her how to identify opportunities and be a go-getter and also instilled resilience and a strong work ethic in her.

Dr Gumede and Ms Msweli credit their achievements to the influence of two family members that they lost. Dr Gumede lost her father while Ms Msweli lost her grandmother. The spiritually inclined mother-daughter duo stated that their prayers and encouragement of each other played a role in their individual successes. 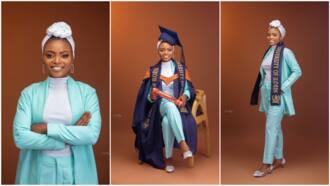 Nigerian lady beats many in UNILORIN, becomes only female first class graduate in a department of 92 students

Read some of the comments they received below:

“Congratulations!! What an incredible moment! Well done to you both!”

“Congratulations mom and daughter. God is good all the time.”

“Congratulations Dumile! Very proud of you my dear.”

Meanwhile, Legit.ng earlier reported that a young lady, Zaynab Agboola, went on LinkedIn to announce how she broke barriers and succeeded greatly in her academics.

She said her journey to getting a degree in engineering started six years ago when she left the comfort of her home in Lagos and travelled to Ilorin for school.

In a class of 92 students, Zaynab emerged as the only female first-class graduate. The lady said that the task was not an easy one.