Two kids, a boy and a girl have joined the Buga train and refused to alight until they have sufficiently made themselves happy.

Buga by Kizz Daniel has gone viral and caught the attention of many dance lovers and the two kids did not fail to jump on it with pure excitement.

They created their own Buga dance step

Their dance style has been described as amazing and unique since it did not follow the Buga style. 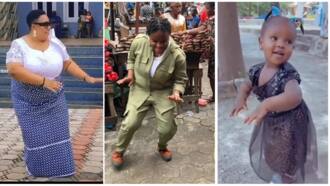 The two kids just decided to catch fun and it came out well and nice. From what is seen in the video, the kids were not concerned about whether they were following the trending dance style, they just wanted to catch fun.

One of the kids just jumped around

The highest point of the dance video is that one of the kids just kept jumping up and down the supermarket.

Anyone who sees the video will surely ask if the boy was listening to the beats of the song at all. But his jumping and excitement added colour to their funny outing.

The incredibly hilarious video was shared on Tiktok by @kadidjapa15.

Old woman in gown dances in public, wows many

In a related story, Legit.ng reported that a grandmother in a gown took to the dance floor at an event and simply wowed the audience. 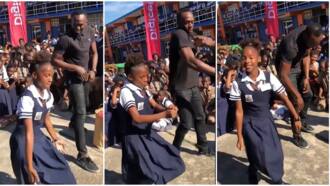 Cute school kid with flexible body takes on Usain Bolt in marathon dance, twists her body like robot in video

The woman showed off her amazing dance skills with a bottle of wine in her hand. But at some points, she dropped the wine on a table and went on to stun the audience.

Other women who were at the party simply watched in awe while some removed their phones and started to capture the wonderful moment.

The dance video of the old woman later went viral on the internet as people admired her for her skills.